COVID-19 ALERTS Protect Yourself and Your Community. Please Get Vaccinated Read On...

Create an Account - Increase your productivity, customize your experience, and engage in information you care about.

All California cities are required to prepare and adopt a general plan to use as a guide in making land use decisions. It is essentially a blueprint for future development and focuses on big-picture and long-term goals. The Signal Hill General Plan includes the following six elements.

The Housing Element provides an assessment of the current and projected housing needs for all economic segments of the population. State law recognizes that local governments play a vital role in the supply and affordability of housing. The Housing Element is unique in that it is the only one reviewed by the Department of Housing and Community Development (HCD) to determine its compliance with state law. The HCD pays particular attention to the required inventory of adequate sites. This inventory demonstrates how cities will accommodate their fair share of projected population growth on a parcel-specific level. The fair share is determined at a regional level by the Southern California Association of Governments and is called the Regional Housing Needs Assessment (RHNA).

The 5th Cycle Housing Element was adopted at the February 4, 2014 City Council meeting and the HCD certified that the Element is in full compliance with the State Housing element law on March 18, 2014. The Element is available for public review in the Community Development Department and by accessing the Housing Element (PDF).

The 6th Cycle Housing Element will be adopted during 2021 and run through 2029. 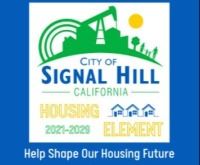 As part of the Housing Element Update, a community survey was circulated from April to August, 2021. 150 people responded, split between residents, students, and employees. Highlights include:

Question: Respondents were asked to rank areas where housing should be built (1-5, 1 being your first choice).

Response: The table indicates that 70% would like housing to be built in the Civic Center neighborhood, followed by 64% located near commercial centers.

Question: Respondents were asked to rank the type of type of housing needed in the City of Signal Hill (1-6, 1 being the first choice).

Question: Respondents were asked to rank the items they consider the highest priority when it comes to housing developments.

Response: Approximately half believe that proximity to amenities such as grocery stores, religious facilities, schools, etc. are important.

Question: Respondents were asked to identify the top three development types most suitable for future study to accommodate the mandated RHNA allocation.

Response: The re-purposing of former oil property received 67% of the responses.

The next steps in identification of potential housing sites will be to:

For more information on the Housing Element Update, please visit the Planning page.

The Land Use Element (PDF) identifies the distribution and intensity of uses within the city. It sets out goals and policies and includes a land use map showing the location and intensity of types of uses, such as business, industry, housing, education, public buildings, and open space.

The Circulation Element (PDF) establishes guidelines and policy direction for the development and maintenance of a comprehensive transportation system for the city.

The Environmental Resources Element (PDF) combines the open space and conservation elements into one document to address the long-term and comprehensive preservation and conservation of open space. It also details the conservation, development, and use of natural resources such as water, forests, soils, rivers, and mineral deposits. In 1989, the City also adopted its Parks and Recreation Master Plan (PDF) and included it as an appendix to the Environmental Resources Element. The Master Plan documents the City’s open space and recreation goals. It also discusses where parks may be site, how to fund park acquisitions and how parks are maintained.

The Safety Element (PDF) focuses on identifying natural or human-made hazards in the City and specifies policies and programs to mitigate hazards to the public. The local Hazard Mitigation Plan satisfies state and federal requirements and provides eligibility to receive federal funding for pre-disaster mitigation and post-disaster relief. The City’s Hazard Mitigation Plan is integrated into the Safety Element as an appendix.

The Noise Element (PDF) identifies and assesses noise problems within the community and establishes guidelines to achieve noise-compatible land uses.